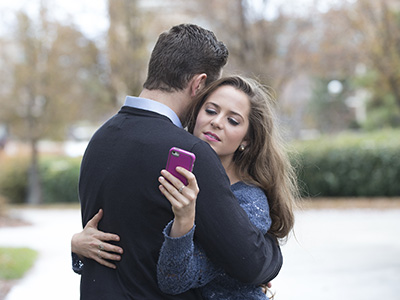 The information age has rapidly changed how we conduct ourselves in business, education, and in general human interaction.

Advances such as email, instant messaging, and social media were all created to make communication easier and more convenient. Families and friends across great distances can now more easily communicate face-to-face anytime they want. Dating sites successfully match thousands of soon-to-be spouses each year, and parents can more easily keep in touch with their children throughout the day.

However, as society adapts to these fresh avenues of contact, there are also ways new technology threatens to strip away important aspects of how people relate and connect on a personal level. This can be especially true in our most intimate relationships.

Here are three areas in which technology may negatively impact relationships:

Intimate relationships often have their own challenges, and changing technologies can contribute even more to the stress of modern relationships. Sometimes, the ways people use technology can create problems between romantic partners, potentially stirring conflict and dissatisfaction in the relationship.

A 2014 Pew Research Center poll indicated that one in four cell phone owners in a relationship or marriage found their partner too distracted by their cell phone. Nearly 1 in 10 had argued with a partner about excessive time spent on the devices. The poll noted that many arguments between couples may have something to do with tech use, such as deciding when to use devices and when to abstain. They also found that younger users were more likely to report both increased tension and enhanced closeness in their relationships as a result of technology.

Technology is also changing some of the most intimate ways in which couples connect. Sexting—sending someone text messages containing explicit sexual content—has increased among adults since 2012, with one in five cell users having received a sext from someone they know—a one-third increase in four years.

Technology can be an effective distraction in the current moment, over a long period of time, and even in its absence. According to a 2015 poll of 453 adults across the United States, nearly half of all respondents reported being distracted by their phones in the presence of a romantic partner.

Those moments spent focused on technology can quickly add up to a sizable portion of a person’s waking hours. The same allotment of time that just a few years ago might have been considered an online addiction is now commonplace in smartphone use, especially among younger users. It represents a shift in how people spend their time and where they focus their energy.

Technology can also be a distraction when it is not in use. When briefly disconnected from their smartphones in a 2014 study, self-described heavy users indicated having higher anxiety levels than moderate users after just 10 minutes.

Heavy use of social media has also been shown to negatively affect mental health. A recent study from the University of Pittsburgh School of Medicine examined depression rates in younger adults, finding significantly increased odds of depression among those spending the most time engaged in social media.

Looking specifically at only personal social media activity, they concluded that heavy use was significantly associated with increased depression and highlighted the importance of identifying interventions for heavy social media users before they experience any mental health issues.

Syncing Up by Powering Down

According to Ohio counselor Jessica Wade, MAMFT, LPCC, the emotional connections forged by couples through body language, nonverbal communication , tone of voice, and facial expression are essential to the relationship and impossible to replicate with technology.

“Overreliance on technology might cause misunderstandings, and partners lose the opportunity to make those immediate relationship repair attempts that happen in the moment during in-person communication,” Wade said.

Experts recommend finding alternatives for curtailing technology’s potential downsides. To break the cycle, the first step may be to temper, or significantly reduce, how much time is spent focused on devices, apps, and messaging services.

Finding time to consistently detach may require penciling it in on a daily schedule. Allotting non-use times (such as during dinner or date night) can help reground partners in their relationship or individuals to their surroundings.

Many individuals, couples, and families have sought therapy when technology overtakes other priorities. Experts also advise improving communication skills whenever possible—something technology can actively disrupt. In a time when emails and text messages have replaced other methods of communicating, the manner and skill with which people express themselves can become less robust and more mechanical.

Studies have also found significant value in spending as much time in nature as possible. One study by Dutch researchers found lower levels of anxiety and depression among people living within 0.6 miles of a park or wooded space.

The benefits of technology reside in an ability to elevate the human experience, but experts advise use of new devices and platforms should be grounded in perspective of how the new technology has the power to change communication and the way people relate to one another. Identifying ways to use these new inventions successfully—without cheating yourself out of genuine human connection in the process—may ultimately require more low-tech solutions.