“Last year’s Opening Day was attended by more than 40,000 race fans. This year, the Opening Day celebration of the seven-week season will take place on Wednesday, July 19, starting at 2pm, beginning with The Party and beloved Hats Contest. Valenti International, title sponsor of Opening Day, will also have special signature touches throughout the track, including founder Irene Valenti thanking guests at valet as they depart with a special Valenti Black Card.” 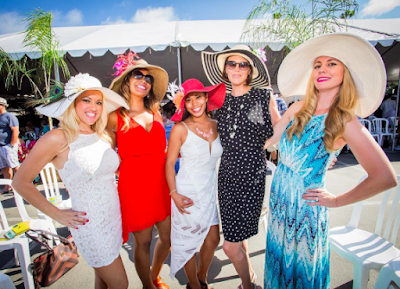 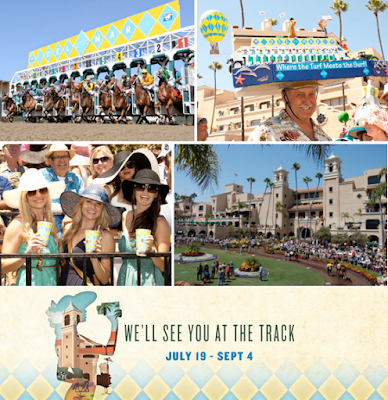 July 6, 2017
And they’re off!!! Del Mar Racetrack is about to swing open its gates for the 2017 summer season of unparalleled racing, taking place over seven weeks starting on Wednesday, July 19 until closing day on Labor Day, Monday, September 4. This year, in addition to exciting horse races, there are plenty of fun events and concerts taking place throughout the season, including a barbecue competition, a taco festival and plenty more!
Last year’s Opening Day was attended by more than 40,000 race fans. This year, the Opening Day celebration of the seven-week season will take place on Wednesday, July 19, starting at 2pm, beginning with The Party and beloved Hats Contest. Valenti International, title sponsor of Opening Day, will also have special signature touches throughout the track, including founder Irene Valenti thanking guests at valet as they depart with a special Valenti Black Card.

Reggae band, Tribal Seeds will kick off the Del Mar Summer Concert Series on Friday night, July 21. Then on Saturday, July 22, racing fans will rejoice when Arrogate, the top earning horse in America, competes in the San Diego Handicap. That Saturday will also begin early mornings at Del Mar and Family Weekends. Other highlights include weekly drink specials and exclusive access into the Turf Club.
Other concerts taking place throughout the season include Violent Femmes (Friday, July 28), Eagles of Death Metal (Friday, August 4), Billy Currington (Saturday, August 5), The White Buffalo (Friday, August 11), Ludacris (Saturday, August 12), Steel Pulse (Friday, August 18), Lord Huron (Friday, August 25), Slightly Stoopid (Saturday, August 26), The Revivalists (Friday, September 1), and Steve Aoki (Sunday, September 3).
Below is a list of the highly anticipated events taking place during the 2017 Del Mar Racetrack Summer Season:
The Party – Wednesday, July 19 – Attendees will get treated like VIPs in the Seaside Cabana tent located at the west end of the Grandstand. Thrill seekers are promised a day of style, sun, music, and action. The Party will be full of DJs spinning, dance floors, beer gardens, prizes, games and more. Tickets are only $35 per person and include Stretch Run admission and exclusive access to the cabana. Gates open at 11:30am with first post at 2pm.
Opening Day Hats Contest – Wednesday, July 19 – Participants sporting the most fashionable hats will win big. The stakes are high with $5,000 dollars in prizes to be awarded. Fashionable fans can compete in the following five categories – Most Glamorous, Best Racing Theme, Funniest/Most Outrageous, Best Fascinator and Flowers/All Other. Sign-ups will be held in the Plaza de Mexico from 11:30am to 3pm. 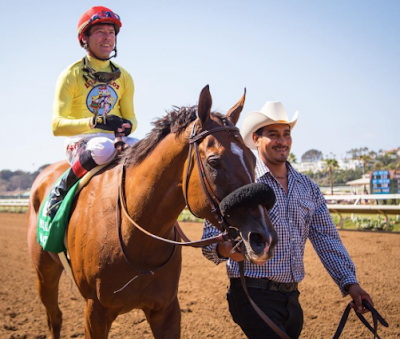 Party In The Plaza – Friday, July 21 – Cocktail lovers will get half off signature drinks throughout the track- including the Del Margarita, Del Martini, Del Mojito, Del Mule and more from 2-6pm! For just $12, beer fans will also be able to buy two 12oz of refreshingly cold Coors Light or Tecate Light in Plaza de Mexico all day long.
Chargers Day at Del Mar – For 55 years, we marveled at their athleticism and the way they kept us on the edge of our seat for every play. On Saturday, July 22, it’s our chance to personally thank those players for every moment and memory. A legion of past and present Chargers players will be at Del Mar to share stories and say one last goodbye to San Diego. Come out and take pictures, get autographs and bid farewell to the players who will forever be San Diego’s Chargers.

Jockey Photo Day – Saturday, July 22 – Super fans will be able to meet the incredible athletes that make Del Mar’s jockey colony. Fans are invited to take a photo, get an autograph and chat with their favorite jockeys. This will take place from 12-1pm in the Plaza de Mexico.Daybreak at Del Mar – Saturday and Sunday, July 22-23 – The Clubhouse Terrace Restaurant will welcome early risers from 7:30 – 9:30am. Visitors will be able to dine and view morning workouts while learning behind the scenes info from Jeff Bloom, former jockey and fan-favorite event announcer. There is no charge for admission, but a $10 parking fee applies.

Family Weekends – Saturday and Sunday, July 22-23 – Families will join the party in the infield with a variety of free activities including pony rides, face painting and an obstacle course. Children receive free racetrack admission and adults can experience the fun for only $6.
Taste Of The Turf Club – Sunday, July 23 – Fans and their BFF’s can enjoy the mouthwatering cuisine of one of San Diego’s most celebrated chefs, Brian Malarkey, at the exclusive Turf Club. Tables are limited and the $150 per person includes Turf Club seating for the race day, Turf Club admission, choice of appetizer, entree, dessert and bottomless mimosas or bloody Marys.

Gourmet Food Truck Festival – Saturday, July 29, Bring your appetite for the tastiest food on wheels when the 7th annual Gourmet Food Truck Festival comes to Del Mar. Enjoy a variety of some of the hottest eats in Southern California as 40 food trucks are expected, all in one location, with gourmet chefs serving their eclectic bests at super prices.
Del Mar BBQ State Championship – Sunday, August 20 – More than 40 of the nation’s top professional BBQ pitmasters, local restaurants and area chefs will be competing in this State Championship for more than $15,000 in cash prizes. Purchase four 2 ounce competition-ready samples of brisket, pork, pork ribs, chicken, steak and/or desert for $10, which includes a Peoples’ Choice ballot to vote for your favorite contestant. Top local BBQ restaurants include Cali Comfort BBQ, Valley Farm Market, Grand Ole BBQ, Coops West Texas BBQ and Brazen BBQ. Pair local craft beer with your succulent barbecue samples. This event is free to enter with track admission.

TacoTopia at the Track – Sunday, September 3 – The San Diego Reader is continuing its search to find the best taco in Southern California, and on the Sunday of Labor Day Weekend, over 40 top eateries from America’s Finest City, Tijuana & Los Angeles will compete for bragging rights at Del Mar Racetrack at the 2nd annual Tacotopia at the Track. There is also a free concert by Steve Aoki following the event! We at SanDiegoVille are giving away 2 VIP tickets to this event and also offering promo code SDVILLE for $5 savings on any ticket type (limited to only 100 tickets).
Racing at Del Mar Racetrack happens Wednesday through Sunday with the exception of Closing Day on Labor Day Monday, September 4. The First post daily will be at 2pm. First post on Friday’s will be at 4pm. with the exceptions of August 25 and September 1 when the first post is 3:30pm.
For more information on the 2017 Del Mar Racetrack season, call 858.755.1141 and visit delmarracing.com.