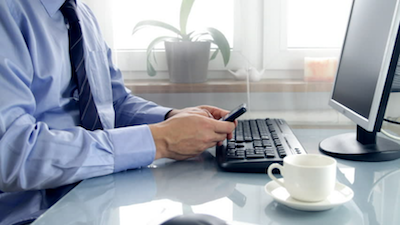 Texting your significant other should be easy. But sometimes, all it takes is one stray ‘K’ or a message ‘read’ without a reply to start an argument.

Texting may be a quick and easy way to communicate, but it lacks the ability to convey emotional tone and context. It’s critical to add an extra few words to be certain your message is not misinterpreted.

Here are six things you should never say to your significant other via text. Unfortunately, it’s common sense texting etiquette that’s surprisingly uncommon.

This is the proverbial middle finger text.  Don’t send ‘K’ texts and avoid any emoji that could potentially be read as dismissive (Looking at you, thumbs up emoji, or the actual middle finger emoji.) Texts like this will led to your partner to guessing about what you’re thinking, feeling and intending. Being brief is fine, but only at appropriate times. You want to be sure that you aren’t coming across as blowing them off.

2) A snarky text that becomes a big, overblown fight

You air a complaint via text. Then, your spouse fires back with an equally petty criticism of you. Before you know it, you’re locked into a written-word war you know you’re going to regret later. Absolutely do not fight over text. If you are going to have any sort of serious conversations with your significant other, face-to-face is the only adult way to do it.

3) A long, rambling block of text

Don’t make your partner stare down a long rambling text while they’re at work or otherwise busy. If the message requires more than a few sentences and it’s a sensitive subject, just wait until you’re both home to talk. Unproductive texts are long and involve emotional content. If you are in a mature relationship, you should know when to have a face-to-face conversation.

Gaslighting is when you attempt to manipulate a person by questioning their sanity. It’s not a good practice when you’re face-to-face, and it’s no less patronizing when you do it over text. Stay constructive when texting. Something like ‘You’re cray cray’ might be texted with the intent of being funny or as a defensive reaction to something the other person said. Chances are that the message is not going to be received well.

If you’re busy, you’re busy. Brusquely sending a text like ‘not now’ or something similar will most likely hurt your partner’s feelings more than you realize. If you’re not able to talk, why not add, ‘Let’s catch up later?’ You can add a cute little emoji to help soften it a bit. An extra few seconds of effort could possibly save you from a terrible misunderstanding.

6) Reading the text and not replying.

The only thing worse than sending any of the above is sending nothing at all. The little ‘read’ notification gives the appearance that you skimmed the text, and then ignored it. This will cause unnecessary frustration and lead to resentment. Ignoring or denying a returned response to your significant other’s text is not a good idea. This is your partner’s bid for connection. It doesn’t matter if this is a request for groceries or a complaint about how disgusting you left the kitchen; your significant other always deserves a response.

Get these tips and other valuable relationship coaching advice when you work with Valenti Matchmaking to find that special someone. Get started now.