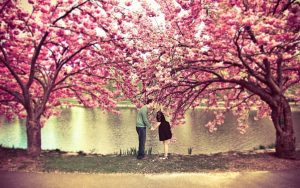 Happy Spring! The team at Valenti Matchmaking welcomes the change in season with open arms. Spring is a time for new life, new changes and for many, new relationships! The birds are singing, flowers are blooming and many people seem to be “in the mood for love!” But is there a scientific basis for this? The team at Valenti found this very interesting article by Lisa Bonos about the possible reasons for Spring being the season for romance.

Spring has sprung, so does science say love is in the air?

When is the best time of year to look for love? The high season for online dating is in the dead of winter. But Mother Nature might point to right about now: when the birds are singing, the bees are pollinating — and humans are likely to be happier and more receptive to romance.

Recently, I spoke to Speaking of Science’s Rachel Feltman and biological anthropologist Helen Fisher about the weather’s role in attraction. Feltman pointed out a study that found that when it’s sunny out, women are more likely to give men their phone numbers when approached on the street. Another found that Machiavellian personalities got more positive responses from women they approached during cloudy weather — meaning that manipulative people have more luck, romantically, when it’s dark out. And so, maybe sunnier times can make us more clear-eyed and less likely to fall prey to deceptive personalities.

But it’s really hard to prove just what makes a woman receptive to being approached on the street, and there’s a big leap from that initial approach to actually falling head over heels. It’s possible that the sun can help bridge that gap. Fisher says the brain is primed to fall in love in the spring. She explained that the pineal gland — which makes melatonin — is very active in the winter, making people sleepy and potentially less awake to romantic potential.

“In the spring, as light hits the retina,” she told me, it goes “into the pineal gland and slows the production of melatonin. And that’s what gives you that light spring in your step, the feeling of giddiness and euphoria. As the melatonin recedes and the light begins to affect the brain, there’s every reason to think that people will simply be more attractive as partners.”

As melatonin declines, hormone levels can rise in the pituitary gland, Fisher says. “It may well be that light affects not only your drowsiness to make you more awake, but it could even stimulate activity in the genitals and just make you feel sexier.”

It’s not clear how much of an effect this actually has on humans. In seasonal breeders such as sheep, the melatonin cycle is crucial — melatonin nips mating in the bud, and its absence puts animals in heat — but humans are more complex.

Fisher also pointed to the excitement brought on by the sights, sounds and smells of spring. Love is associated with the dopamine system, which is excited by novelty. “Novelty can stimulate the dopamine system and perhaps even push you over that threshold into falling in love,” she says.

I’ve certainly had more of a spring in my step recently. Just this week while walking home from work in Washington, I noticed the aroma of cherry blossoms mixing with the smell of outdoor grills being fired up. It didn’t turn me on, but it did make me hungry.