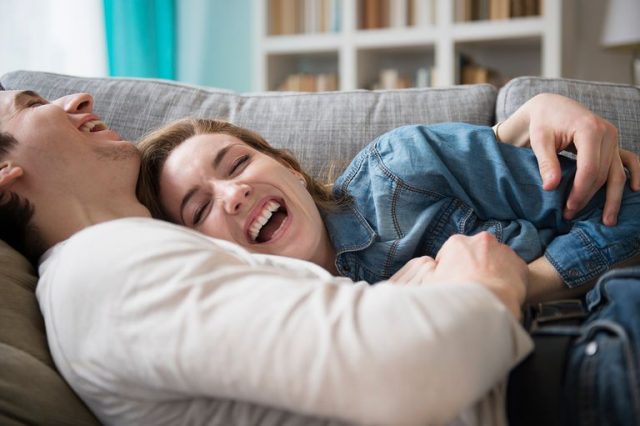 The team at Valenti Matchmaking believes that laughter is a foundation for a happy life! Sharing a good laugh with a loved one is one of the best experiences in life. Humor can not only make the hard times easier to bear, but it can also be a wonderful way to attract the right partner!  The team at Valenti found this fun article by Aaron Ben-Zev, Ph.D. that examines all the ways that humor can enhance your love life.

Humor and Love : The role of humor in romantic relationships

Humor, which might seem to clash with the intensity typical of romantic love, can be valuable in romance. But is humor always good in love? Is it useful for seduction? And should we tell jokes during sex?

Humor is similar to emotions in that it has a strong element of incongruity and change. Both emotions and humor combine two perspectives — the expected and the unexpected. However, while in emotions the simultaneous presence of incongruent perspectives is problematic, and hence requires immediate practical action, in humor the incongruity is enjoyable and requires no action. In contrast to the practical orientation of emotions, humor involves a more abstract and less purposeful activity. In the case of fear or anger, we prepare ourselves to fight or flee; but when we laugh at something amusing, we are not preparing for action of any kind. Indeed, when laughing, we are temporarily disabled. We often use humor in order to block negative emotions, such as fear, anger, or sorrow, or to resolve tensions.

A sense of humor is typically incompatible with an extreme emotional state. Martha Nussbaum indicates that Seneca recommends, as a way of coping with extreme anger, that we cultivate a sense of humor about the vagaries of life and adopt an attitude of amused detachment toward ourselves. This is also Aristotle’s view when he praises the person who has a “gentle temper”. Laughter and playfulness can indeed promote moderation and reduce extreme emotional intensity. Such amused detachment can also prevent obsession (and addiction), which is characteristic of extreme rather than moderate behavior.

In a similar vein, humor can reduce or eliminate shame. Laughing at ourselves serves to distance us from a shameful situation as we join others in taking a fresh perspective on an episode. This new perspective also helps to reduce the level of shame we feel and to relegate it to a minor, trivial level. Such a distance reduces the significance of the shameful situation and decreases emotional intensity.

“Your wife has a great sense of humor; yesterday, I told her a joke, and she almost fell out of bed.” —Anonymous

Humor involves honesty, particularly when it touches upon the most profound issues in our life; it also involves exaggeration, which can lead to an embellishment of the truth and thus to deception. The sensitivity associated with humor indicates that it involves caring for others, but this sensitivity is also associated with not taking others too seriously — sometimes to the extent that other people might feel insulted. A sense of humor indicates that we feel good about ourselves, while not attaching too much importance to ourselves. As Gilbert Chesterton notes, “Angels fly because they take themselves lightly.” Spontaneity and light-heartedness are essential aspects in life and in romance, but they do not imply that relationships are trivial or frivolous matters. We all need experiences that are carefree and unexacting in order to balance the stresses and strains in our lives.

This is also true in the romantic realm.

Both men and women prefer someone with “a good sense of humor” as a relationship partner. However, studies have shown that while men emphasize the importance of their partners’ receptivity to their own humor, women value humor production and receptivity equally. Women’s evaluations of potential mates’ humor are predictive of their romantic interest. Moreover, individuals who were more satisfied with their relationship reported the use of higher levels of humor. Humor and a light-hearted attitude seem to be important aspects of many romantic relationships . Similarly, Jeffrey Hall found that when two strangers meet, the more that a man tries to be funny and the more a woman laughs at those attempts, the more likely it is that the woman will be interested in dating. The reverse was not true for women who attempted humor. However, an even better indicator of a potential romantic connection is if the two laugh together.

“Candidates should be extremely cautious in displaying a sense of humor. If he or she tells a joke with a point, there is almost certain to be some minority group offended.” —Jack Germond

In analyzing various types of humor, we can refer to (a) the agent’s attitude in humor — here the division is between positive, negative, and instrumental attitudes — and (b) the way of conveying humor — here we can discern between telling jokes and humorous styles of actions and speech.

Humor is beneficial when it’s used in a positive fashion with the aim of improving the overall atmosphere. Thus, in personal relationships, humor enhances a pleasant atmosphere between the partners and is conducive to conflict resolution. Lorne Campbell and Sarah Moroz show that individuals whose partners use more positive humor while discussing a relationship-based conflict reported greater resolution of differences and felt more satisfied in their relationship. They also note the negative ways of using humor. For instance, more aggressive forms of teasing — such as ridicule, intimidation, or manipulation — can be used in order to discredit the partner’s arguments or feelings. Individuals who are exposed to aggressive humor feel more rejected by their interacting partner, as well as sadder in mood and less willing to continue the interaction. In addition, agents can also use an instrumental attitude in their employment of humor; here, humor is a means for achieving an external goal. Instrumental humor might offer short-term benefits, but individuals whose partners routinely use this style of humor (as well as the negative one) can feel victimized or manipulated.

Among all these ways of conveying humor, of greatest value is doing things in a playful humorous manner that provokes shared laughter and mutual appreciation of the type of humor that is used. It is typically a shared dialogical activity, including a kind of romantic resonance. Interactive playfulness between romantic partners is crucial for establishing relational security and is an important indicator of romantic attraction between potential mates. On the other hand, when one partner tells a joke, the teller and the receiver are more passive: the teller recites something that he or she has already recounted many times, and the receiver is even more passive. Indeed, Hall claims that telling jokes is not strongly related to relationship satisfaction.

Humorous playfulness and the fact that humor opens up alternative perspectives are both associated with a major aspect of intense love, namely, its incomplete nature. Such love is always an unfinished business, which in turn increases romantic desire. In characterizing the perfect seducer, Robert Greene mentions increasing ambiguity, sending mixed signals, mastering the art of insinuation, confusing desire and reality, stirring desire and confusion, toning down the sexual element without eradicating it, refusing to conform to any standard, being able to delay satisfaction, and not offering total satisfaction. To various degrees, humor shares these characteristics as a humorous atmosphere, although not threatening, is also partially incomplete. The suggestive, insinuative nature of humor is particularly relevant here. A humorous remark or lighthearted behavior often remains ambiguous, enabling the receiver to interpret the behavior or remark in whichever way she or he wants.

Should We Tell Jokes During Sex?

In order to illustrate the difference between positive and negative types of humor in romantic relationships, I will now discuss the sensitive issue of telling jokes during sex. Here are some divergent opinions on this matter:

These random remarks suggest that playful, lighthearted behavior can be conducive to a pleasant sexual atmosphere. However, as humor is often context-dependent, it should be used carefully. As noted, humor involves taking a few perspectives at the same time; not all perspectives are suitable during love-making, and some can indeed “just kill the mood.” Nevertheless, in “a silly longer-term relationship,” people can afford to risk jesting more as their humorous behavior is less likely to be interpreted incorrectly.

“If I had no sense of humor, I would long ago have committed suicide.” —Mahatma Gandhi

In nature, humor is not a joke. Its value for survival consists, at least in part, in its function as a counterweight to the strong influence exerted by emotions on our behavior. In this sense, humor is similar to art; both draw attention away from the self and its desires, thereby enabling us to look at reality from a safe and somewhat different perspective. This makes it possible for us to relax and cope better with reality. It is also beneficial in romantic relationships, which involve many routine, sometimes unpleasant, activities. Humor increases relationship satisfaction, as it enables us to cope better with conflicts and helps to create a more pleasant and relaxing general atmosphere.